Rollerderby?! Never heard about it?

Or you want to know more about our team ZÜRICH CITY ROLLER DERBY (ZCRD) or figure out how you can participate? This is the right page for you!

The origins of Roller Derby lie in the USA of the 1930s and 40s. It all began as a kind of six-day race, which soon turned into a show fight similar to wrestling. In the early 70s, however, Roller Derby disappeared in this form.

Only in 1999 it was rediscovered and revived. The Riot Grrrls of the punk movement appropriated Roller Derby. From now on commercialization was no longer in the foreground, but the fun of the game and self-organization. The rules were radically changed or rewritten.

Today Roller Derby is the fastest growing sport in the world. In 2006, the London Rollergirls were founded as the first European team. In 2009, the ZÜRICH CITY ROLLER GIRLZ were founded. The teams are organized in the Women’s Flat Track Derby Association (WFTDA), creating a vast network of lively exchanges and personal contacts. We play against each other. And celebrate together.

ZCRD is by far the largest league in Switzerland. Since April 2018 we have a new logo and the Zurich City Roller Girlz became Zurich City Roller Derby. Like all other leagues, ZCRD is based on self-organization. This means that all league members contribute to making us such a great and successful team.

In fact, since 2016 we are two teams. The AllstarZ is our A team and the BruisesZ is our B team. We train 2 to 3 times a week and regularly play bouts (games), both in Zurich and throughout Europe. If you want to watch us, just come to our next Bout. On Monday evenings, you can usually watch the BruiseZ train in Puls 5.

But of course, you can also join us directly. Twice a year we organize try-out trainings and a newbie course where you can learn everything from the beginning. Generally, Roller Derby is probably the most diverse sport. That goes for the tasks you can do as well as for the people who are involved. We speak a funny mixture of Swiss German, High German and English. Spanish can also be heard from time to time. Every age (from 18), all body shapes and all genders are welcome in the team. You can find out more about this under Get Involved!.

Roller Derby is a full contact sport on roller skates. The rules are complex. Here is a small overview. 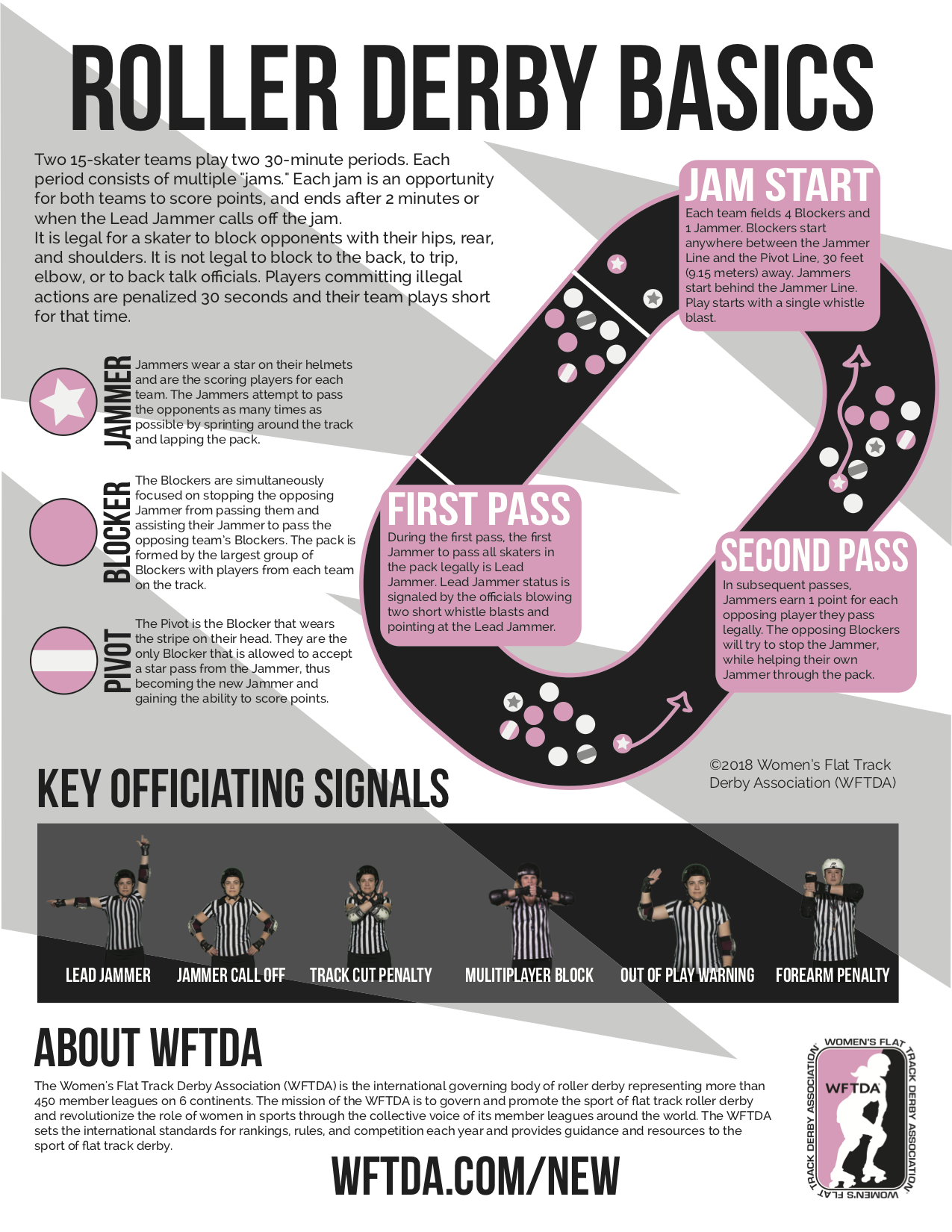 The game “Flat Track Roller Derby” is played on a flat, oval playing field. The game is divided into two 30-minute halves. Within these halves, there are game units called “jams”. A jam can take up to 2 minutes. There are 30 seconds between each jam. During a jam, each team sends up to five skaters onto the track. Four of these skaters are referred to as “blockers” (all blockers together are referred to as a “pack”) and one skater is the “jammer”. The jammer wears a helmet cover with a star. The two jammers start each jam behind the pack and get one point for every opponent they pass. Since they start behind the pack, they first have to skate through the pack and then around the track to score points for passing opponent blockers. Roller Derby is a sport with full body contact. However, skaters are not allowed to use their heads, elbows, forearms, knees, lower legs or feet to attack opponents. Contact to the head, back, knees, lower legs or feet of opponents is illegal. Dangerous or illegal actions may result in a skater being penalized, meaning that this skater must spend 30 seconds in the penalty box during a jam. The team with the most points at the end of the game wins.

If you want a more detailed explanation, look here.